It is almost impossible to pick up a clinical journal or go to a conference, lately, without stumbling upon the topic of Demodex. Although the significance of this parasite for humans was described as early as the 1960s,1-3 its clinical relevance attracted limited attention. The incorporation of both diagnostic and therapeutic information has catapulted this organism to be the buzzword of the day in the realm of ocular surface health. Most clinicians vaguely remember, if at all, a brief description of Demodex in their ocular health course on lid disease. Little was known about the organism, except that it was often described as ‘found universally’ in older adults.4 However, its association with other ocular anomalies were unknown so consequently it fell off the differential diagnosis radar as a potential cause of anterior segment afflictions. This editorial – including images and a video – offers an overview of the current knowledge on Demodex and its relevance to clinical practice.

What is Demodex?
Although several species of Demodex exist, only two inhabit humans, namely Demodex folliculorum and Demodex brevis.2, 5-12 This ectoparasite (living outside the human body) is the most common organism found on the human body and its presence increases with age. D. folliculorum, the larger of the two species (0.3-0.4mm), has an affinity for hair follicles including eyelashes, eyebrows, nose and ear hair, scalp, chest hair, underarms, etc. and is typically found in groups of mites. Alternatively, the shorter species, D. brevis (0.2-0.3mm), has a preference for sebaceous glands, including those on the face and the meibomian glands and tends to live on its own. The word Demodex originates from the Greek word ‘demos’ meaning ‘fat’ and ‘dex’ meaning ‘worm’.2

The life cycle of Demodex varies between 14 to 18 days, going through different stages starting with the egg to larval stage to adult mite.11-13 The adult mite has four bud-type legs on either side of its head, and has a head to body ratio11 of 1:2 for the D. folliculorum and a 1:1 for D. brevis. Click here for a short video. 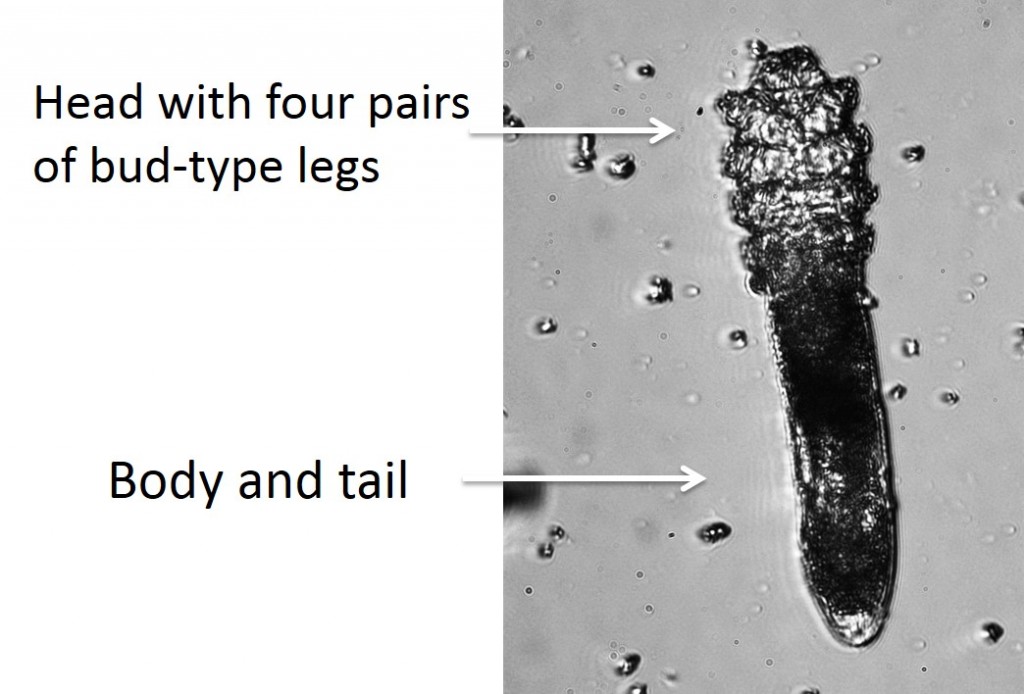 Female mites can lay as many as 10-12 eggs at a time, consequently leading to overpopulation of the infected area if left unmanaged. Prevalence of Demodex infestation increases with age, with a reported 84% in people >60 and 100% of patients >70 years of age.1,10 Direct contact is needed to transfer mites from one person to another, most probably through common household items such as linen, towels and toiletries.10,14 Contact lens wearers,15 those afflicted with acne rosacea,16-19 immuno-compromised patients,20-23 patients with blepharitis24-26 or history of chalazia27-29 have been reported to harbour greater numbers of Demodex.

The existence of the mite outside the human body is limited, although the exact timing is unknown.11 The Demodex mite avoids light and buries itself head first in the follicles or glands, with only the tail visible at the opening of the lash follicle.2,10 The D. folliculorum mite burrows down the eyelash follicle to lay its eggs and ingests the gland lining using its sharp mouth, resulting in follicular distension and trichiasis (misdirected lashes). Debris generated from the mites accumulates at the root of the lashes and is clinically observed as a gelatinous cylindrical ‘sleeve’ or cylindrical dandruff (CD) at the base of the eyelash, which are pathognomonic for mite infestation.30 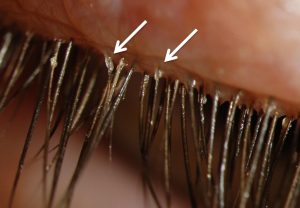 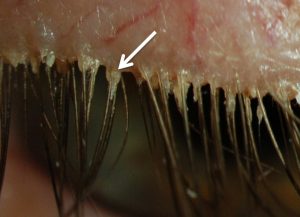 Figure 3: Distension of the follicle at the base of the eye last can be observed as a triangle shape.

This debris can be differentiated from other debris on the lashes, caused by make-up and other causative factors of anterior blepharitis (e.g. Staphylococcus aureus). One key indicator is that the cylindrical dandruff remains at the root of the lashes and is independent of lash growth. Contrary to the flaky yellow “collarettes” typical of blepharitis secondary to Staphylococcal aureus infection, which are found at any point on the lash as it elongates, the cylindrical dandruff associated with Demodex remains at the base of the lash.

Demodex mites have also been reported to act as vectors for bacteria (staphylococci and streptococci), either by carrying them on their body or within their gut (bacillus oleronius). Either way, the mite, its waste and cytoskeleton may all be contributory factors in generating an inflammatory or even an immune response on the ocular surface.11,19,27,31

Clinical evaluation of Demodex folliculorum
Symptoms of Demodex infestation include ocular discomfort, itchiness, burning, foreign body sensation, blurry vision and dryness.10,32 One of the key symptoms in ocular demodicosis is itching,33 especially along the lid margin. To date, there is no convincing evidence which correlates the minimum number of mites required to induce symptoms.11,34 Some Demodex-positive patients may even be asymptomatic,9 further confounding the true prevalence of Demodex, as these patients are less likely to present for examination.

Ocular signs include the pathognomonic cylindrical dandruff at the base of the lashes, trichiasis (misdirected lashes), madarosis (loss of lashes), telangiectasia and ocular hyperemia. Strong evidence of comorbidities has been reported, including meibomian gland dysfunction,24-26 recurrent chalazia27-29 and acne rosacea.16-19, 31

To date, confirmation of diagnosis involves epilation of several sample lashes with cylindrical dandruff, which are then transferred to a microscopic slide so that the lashes and mites can be observed ex-vivo under a light microscope.10-11 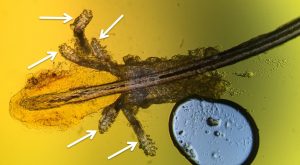 Figure 4: 5 mites seen along the root of the lash 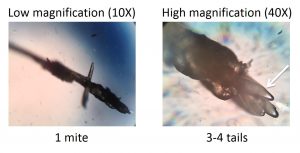 Figure 5: Image on the left seems to only one mite, but a closer look (right)  reveals several mites on the same eyelash, including at least 3-4 tails.

Confocal microscopy remains the only technique, to date, to view the mites in vivo, but this technology is likely to be restricted to an academic or research setting. Supplementary clinical observations have been proposed, including pinching the affected lash with tweezers and rotating it while observing, under high slit lamp magnification, the tails of the mite emerge from the follicle.36 Emerging technologies that are helpful in viewing Demodex include the BlephCam (Scope Ophthalmics, UK),37 a portable illuminated digital camera that magnifies the lid margin to enhance observation. The BlephCam offers an alternative to view the lid margin and educate patients if anterior segment imaging is not available.

Management of Demodex infestation
The emphasis of therapy hinges on reducing the numbers of mites and alleviating symptoms such as itching. As with any therapy, patient education is key, to explain the nature of the problem and the life cycle of the parasite so that compliance is maintained for the prescribed period of time. Effective treatments against Demodex include pilocarpine gel,39 oral ivermectin for ocular and skin demodicosis40-41 and tea tree oil.42-45 Tea tree oil is derived from the leaves of Melaleuca alternifolia, a tree native to Australia, which possesses anti-microbial properties.42 In its pure form, it is extremely harsh to the skin, hence patient education is crucial in avoiding severe ocular irritation. Consequently, commercial formulations contain diluted tea tree oil, although the degree of dilution is not always divulged. Tea tree oil has been found to be toxic to the mites and assist in reducing mite counts by promoting their migration out of the follicles. They can then be removed by lid scrubs.43-45

Further research into tea tree oil has indicated that the active ingredient that Demodex is most sensitive to is terpinen-4-ol (T4O).46 The only commercially available lid scrub with T4O is Cliradex® (Biotissue, USA), which remains the treatment of choice for many sufferers.11 The recommended regimen involves cleaning along the lash line twice a day (bid) for three weeks, followed by a nightly treatment for another three weeks, to coincide with the lifecycle of the mite and the eggs that will subsequently hatch. It is recommended that clinicians demonstrate the use of Cliradex® with patients, as it is associated with a cooling/burning sensation similar to that produced by menthol. Other lid scrubs intended for at home use and containing varying amounts of diluted tea tree oil formulations include: SteriLid (Theratears/Akorn),48 Ocusoft Lid Scrub PLUS (Ocusoft),49 I-lid’n Lash PLUS (I-med pharma)50 and BlephaDex (Macular Health),51 but studies on these products have yet to be published.

Products designed for in-office use have also emerged, such as I-lid’n Lash PRO (I-med pharma),50 with 20% tea tree oil, and Oust™ Demodex® Swabstix™ (Ocusoft),52 with a combination of tea tree oil, sea buckthorn and coconut oil, however their efficacy have not yet been reported in the literature. Patient instruction is key in using these products, as the increased tea tree oil concentration is harsher to the skin and ocular surface and may necessitate topical anesthesia prior to use. Mechanical cleaning along the lash line using a novel instrument, BlephEx (Rysurg),53 has also been shown to alleviate symptoms of anterior blepharitis and dislodge debris via a rotating disposable medical sponge tip.

Demodex infestation has been shown to affect ocular comfort,10,32 play a role in skin (acne rosacea) and ocular (blepharitis, chalazia) afflictions9 and potentially lead to discontinuation of contact lens wear.14 These should all be strong motivators for clinicians to take a proactive role in identifying Demodex and advocating for a healthy lid margin.