The dangers of exposure to ultraviolet radiation (UVR) are well known to many people. Australians have been encouraged to protect their skin from UVR via the ‘slip, slop, slap’ campaign for many years, and in 2007 the campaign expanded to include “seek [shade] and slide [on a pair of sunglasses]”. This public health message has been well received

Those in the eye care field are specifically interested in the effects of UVR on the conjunctiva, lids (and adnexae), lens and retina. There is still some controversy about how much damage is done at the various levels of the eye. It is however generally accepted that reducing or eliminating UV exposure to the eye is beneficial. Blocking UV can slow (or potentially prevent) the development of pingueculae and pterygia, cataracts and (maybe) macular damage, in addition to certain cancers.

There has been increasing research into this subject over recent years and some excellent studies are shedding more light on this interesting and complex field. This review summarizes and provides context for a recent article exploring the effects of UV light.

Kwok et al.1 demonstrated how UV light striking the temporal limbus is focussed (and concentrated) onto the nasal limbal area by the cornea. This “peripheral light focussing effect“(PLFE) helps explain why we typically see pterygia and pingueculae in this area of the conjunctiva (see Figures 1 and 2). 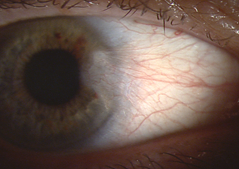 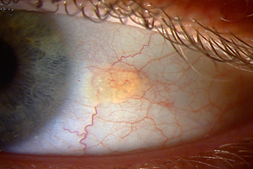 I have seen evidence of this in my patients over three decades in practice. My patients often think I am a pretty good detective when I suggest reasons for their ‘uniocular’ pterygia. There have been a number of cases where I have asked a patient if they did long distance driving. (Sales reps and truck drivers are good examples). Many of these people drove with the driver’s-side window open for cooling, before automobile air-conditioning became commonplace. For those drivers in countries with right hand drive vehicles, the pterygium is thus usually more marked on the right eye’s nasal conjunctiva and vice versa.

Of course, there are other cases of marked bilateral pterygia that are seen typically in surfers, fishermen and those who spend long hours outdoors in bright sun with little or no protection. Some of the most prominent pterygia I have seen have been in patients from the Pacific Islands, Southern Africa, New Zealand, Australia, India, Pakistan and the like, where high altitude, sandy beaches, deserts, farming, fishing and surfing lead to high levels of UV exposure. Many refer to pterygia as ‘surfers eye’.

To me, clinical observation provides enough evidence of the role of UV in such pathologies – but it is always gratifying to back up such anecdotal evidence with good solid science. Fortunately, the evidence base is becoming a lot clearer.

What, why and how?

Apart from previous work on the PLFE and the ophthalmohelioses by Coroneo et al.2, recent research by Wolffsohn et al.3 has also been helpful in explaining the mechanisms of anterior eye UV damage.

The authors explain how excitation of various cellular structures by UVR of particular wavelengths results in light emission, which is termed “autofluorescence”. They refer to a study examining this autoflurorescence in a relatively controlled population on a geographically isolated island off the coast of Australia that has minimal pollution and consistent levels of sun/UV exposure. The results of that study revealed that the area of autofluorescence was greater in males, that it declined with age, with no statistically significant difference between eyes or links to systemic conditions. There was more autofluorescence nasally, which they felt was linked to the aforementioned PLFE. Approximately 3% of the population showed no measurable autofluorescence.

To get a more varied sample as a comparison, Wolffsohn et al.3 captured autofluorescence images of the eyes of 307 eye care practitioners from the Czech Republic, Germany, Greece, Kuwait, Netherlands, Sweden, Switzerland, United Arab Emirates and the United Kingdom. A standardized imaging protocol, camera, flash and filter systems were used to ensure consistent measurements of conjunctival autofluorescence. Subjects provided data such as age, sex, Rx, habitat, propensity for sun exposure as well as use of sunglasses and/or contact lenses. Ages ranged from 19–68 years, with a mean of around 40.

The results showed that 62% of subjects had some UV-induced conjunctival damage (compared to 96% in the Norfolk Island study), and that this damage was worse nasally. They also reported that ‘the area of UV damage was less nasally in those who wore contact lenses and spectacles compared to those with no refractive correction use’. This confirms the need for UV eye protection, hats, sunblock and adequate skin coverage. In Australia (and elsewhere) there is a growing evidence base showing increased risk of UV related sun damage, thinning of the ozone layer, skin cancer, melanoma and the like. A paper by Norval et al.4 provides an excellent overview of UVR and the aforementioned issues. It provides a broad perspective and is well worth reading.

As far as retinal damage goes, the results of a study by Youn et al.5 showed that ‘cellular viability, mitochondrial function, nuclei fraction, and phagocytotic activity of human retinal pigment epithelial cells were impaired by environmentally relevant levels of UV radiation in a dose-dependent manner’.

I’ve long been interested in UV damage and the retina and have asked many experts about the potential benefit from UV blocking contact lenses and IOLs. There has been much debate about this. One of my questions has been that if the cornea and lens of the eye naturally block most UV, then why the concern? The answer has generally been that UVR is potentially very damaging energy: Thus even the 1 to 2% of UVR that reaches the retina, is potentially damaging. That sounds like a reasonable premise to me – and given how easy it is to protect the eyes, why take a risk?

As primary eye care practitioners it is our clinical and ethical duty of care to discuss UV protection with our patients, assess their lifestyle and potential risk. It thus behooves us to recommend and prescribe the optimum UV protection. This will usually include UV blocking spectacles, sunglasses, contact lenses, IOL or a combination thereof.