What is the best way to wear contact lenses?  This is one of those questions to which there is no single answer but for what seems to be an increasing number of individuals, daily disposables may be the closest we have yet come.

Throwing lenses away after a single day of wear has several advantages, and for the clinician the most important is probably safety. While solution-based care systems are efficacious when used correctly, following manufacturers’ instructions involves many individual steps, as indeed do successful contact lens case hygiene  procedures 1.

Unfortunately, human nature dictates that all wearers will fail to comply with all these requirements more or less often2, and the chinks in the anti-microbial armour that these lapses create can have disastrous consequences in terms of corneal infection and  associated pain, vision impairment and lost productivity.

Of course, switching to a daily disposable does not guarantee compliance with that modality either, but at least there is only one thing to remember. An additional bonus is that removing the process and paraphernalia of daily hygiene provides substantially greater convenience, which is a major factor driving wearers’ satisfaction with their method of vision correction.

So there are good reasons for both clinicians and wearers to like this option. With that background it is then surprising that the application of daily disposable lenses has varied around the world as much as it has.

Figure 1 shows how practitioners have used this type of lens over the last four years or so, and reveals some interesting features. First it can be seen that while there was already enthusiastic fitting taking place in Europe by 2007, the uptake was more delayed in other regions, with the United States being a particular laggard. The reasons for this have been much debated, with the financial implications of cost to the wearer and how to structure payments being proposed as significant factors. Usage since then has generally increased, though rates vary from place to place. As might be expected, those countries starting from the lowest bases have shown the largest rises, with China and the United States quadrupling their consumption in that four-year period. 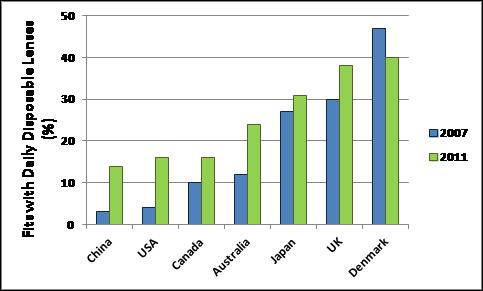 Interestingly the country with the highest percentage of fits in 2007 (Denmark) had experienced a slight fall by 2011, perhaps suggesting that there is a plateau at around the 45-50% mark, beyond which it is difficult to progress. Historically, this would make some sense as situations do exist for which no daily disposable alternatives are available. Looking at the current landscape however, it is clear that these restrictions are easing.

Examples of both toric and presbyopic daily disposable lenses are now on the market and silicone hydrogel versions have been launched by several manufacturers. This trend is surely likely to continue and with early concerns about poor reproducibility being allayed by modern manufacturing methods (the very occasional discovery of a “dud” lens now comes as a major surprise), this proliferation of options seems set to lift the limit on potential fitting targets.

In a similar manner to the way in which silicone hydrogels have replaced hydrogels, daily disposables seem likely to become the dominant force in the contact lens world over the next few years.