A case report in the refitting of a presbyopic patient from monovision to aspheric multifocals, and then ultimately to translating RGP bifocals

MTC, a 46-year-old Caucasian female, had been a long-time wearer of spherical rigid gas permeable (RGP) contact lenses. Two years prior, her lenses were adjusted for monovision (OD distance, OS near):

As a research scientist on the NASA mission that sent two rovers to the planet Mars, MTC’s increasing workload during the mission’s success augmented her presbyopic symptoms. To perform her near and computer work (10 – 12 hours daily, both laptop and desktop), and still see well in the distance, MTC needed more help. She rejected enhancing her monovision on the principle of not sacrificing her distance vision any longer. This case report illustrates her refitting process. 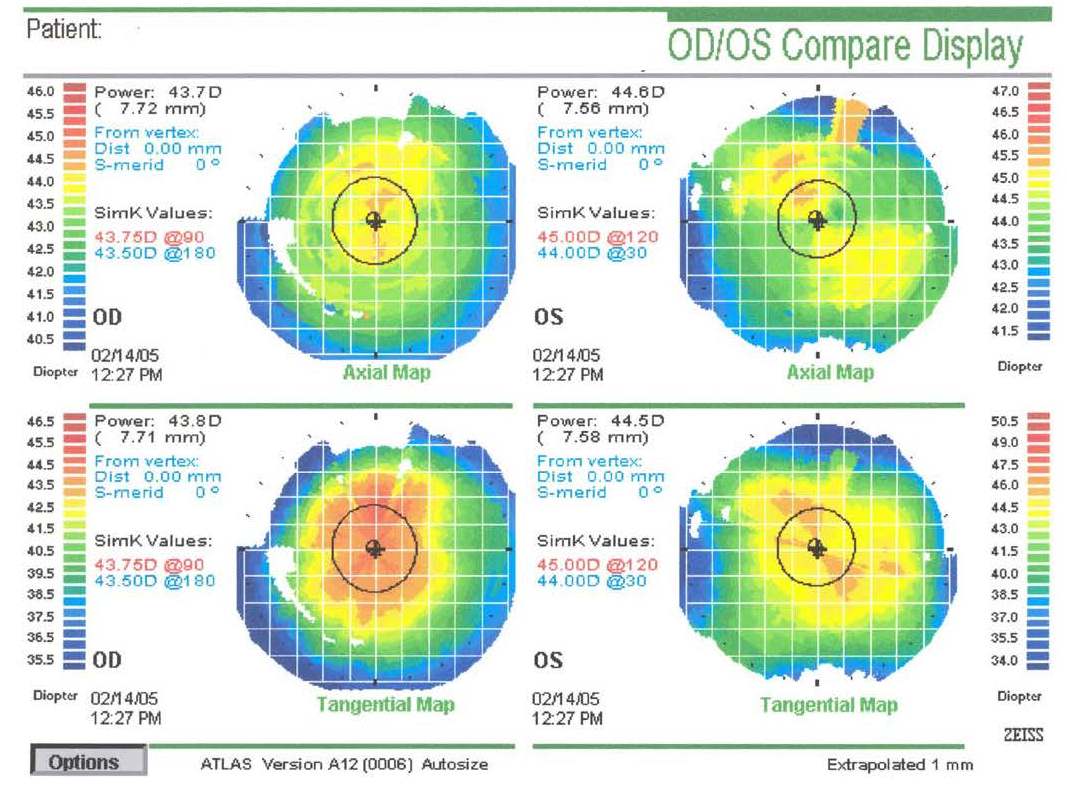 I considered MTC to be an early presbyope with a slightly reduced tear film (her tear break-up time was 8 seconds in each eye). She had an 11.5 mm corneal diameter but only a 9.5 mm palpebral fissure. Her lower lid margin was about 1.0 mm above the lower limbus while her upper lid margin position varied according to her state of relaxation (between 1.0 and 2.0 mm below the superior limbus). The pupil size was 3.0 mm in each eye under mesopic conditions as measured with a ruler in the exam room and confirmed by the corneal topographer.

In preparation for her new lenses, MTC agreed to modify the placement of her work and home office computers and to change her habits by taking more frequent visual breaks and using artificial tears.

When ordering aspheric multifocal RGP lenses, I have found it advantageous to control, or at least be aware of, as many parameters as possible. With proprietary designs, this is often challenging.

For MTC, I began with a custom design that I could modify to her demanding VDT (visual display terminal) needs, and ordered the first set of lenses based on an empirical fit. I chose an eccentricity value of 0.9 so that there would be adequate plus power as the base curve flattened toward the periphery.

As with other aspheric multifocals, MTC’s lenses had to be fit steep. To determine the base curve, I first determined the toricity (0.25D OD and1.00D OS). Using these values and Mandell’s recommendations as a guide, a spherical lens would be fit along the flat-K OD (43.50D) and 0.25D steeper than flat-K OS (44.25D). Because MTC was a younger presbyope, I wanted her aspheric lenses to be fit 2.50D steep. For older presbyopes, or those who need a stronger reading add, I normally fit 3.00D steeper.

In determining the back-vertex power of the central region (i.e. the distance power), the manifest refraction was adjusted for the vertex distance, -2.50D was added to account for the steep fit, and in an effort to avoid over-correction in the distance an extra +0.50 was added. In the event of subjective distance blur when the lenses are dispensed, this under-correction can be easily reversed by adding minus power with an in-office lens modification.

Hydro-2 material was chosen because it has a low wetting angle. Whereas higher Dk and index of refraction materials are available, they can come at the price of poorer wetting and hence reduced lens comfort. In my opinion, MTC’s low risk of corneal hypoxia with RGP lenses seemed much less worrisome than her potential for age and VDT-related dry eyes.

By favoring good wetting over superior Dk, the hope was to avoid a future situation where the RGP bifocals fit well and provide excellent vision, but are uncomfortable to wear.

With the above factored, the following was ordered:

After one week of multifocal lens wear, MTC felt that the lenses were comfortable but she complained that every aspect of her vision was sacrificed slightly. She felt her nighttime driving vision was reduced, and she could not see the slide presentations at meetings if the room lights were dimmed. She could see her 17” desktop VDT but had difficulties with her smaller laptop screen. She was very satisfied with her reading ability with printed material, provided that she used a reading lamp (which she did not mind doing). She also noticed that her spectacle-corrected vision was worse immediately after contact lens removal than in the morning before contact lens insertion.

One week later, MTC was much more satisfied with her distance vision in the daytime and noticed a slight improvement at nighttime. She was still not pleased with her vision when viewing slide presentations at meetings, since the slides usually contained a lot of information, much of which she was unable to see clearly. Regarding her VDT vision, she stated that she could manage, but only after fussing with lights and adjusting her working distance. Finally, she felt that her near vision was slightly worse following the contact lens modification and resigned herself to using a reading lamp, which helped tremendously.

The aspheric RGP multifocal lenses fit well and the vision was reasonable (from an objective point of view), but MTC seemed more resigned to the limitations than I had liked. Her quiet disappointment was really displeasure with simultaneous vision and the subtle, omnipresent blur. Because of the temporary spectacle blur induced by the steep fitting, aspheric RGP lenses, MTC avoided wearing her glasses in the evening and resorted to wearing her contact lenses until bedtime. She found her spectacle vision to be clear only in the morning, before inserting her contact lenses, and thus could only wear them then.

In short, MTC was a perfectionist, and so I felt I needed to try a different bifocal design if I were to come reasonably close to her high expectations. I explained that her visual requirements exceed the limitations of the pupillo-centric aspheric design, and that I might provide her with crisper vision if I employed an alternating vision translating bifocal. Because of her excessive computer use, however, I planned to incorporate a mild modified monovision approach to her refit. I chose the Tangent Streak Bifocal and followed their fitting guide.

The following lenses were ordered:

With a big smile, MTC said that she liked these contact lenses more than the previous design. Overall, she felt that her vision was much better.

At the one-week progress check, MTC said that she “loved” her contacts and vision.

This case of a bifocal fitting illustrates the value of having multiple lens designs at one’s disposal. Binocularly, MTC ended up with 20/20 vision in the distance and could read printed material easily. From an ergonomic standpoint, she consciously kept her desktop monitor at a comfortable position so that she could view it clearly through the top portion of the left lens, without tilting her neck. For the lap top computer, she indicated that it was not a problem with either the intermediate or near zone if she was conscious where she placed it. Finally, and much to her pleasure, she was able to alternate quickly between her contact lenses and spectacles because the RGP base curves were spherical.