This editorial serves as an introduction to our new website but it is also being used to acknowledge Otto Wichterle’s (Fig 1) development of the soft contact lens, and to celebrate the 50th anniversary of the first soft contact lens made in Wichterle’s garage, in Prague, Czechoslovakia (Figure 1). 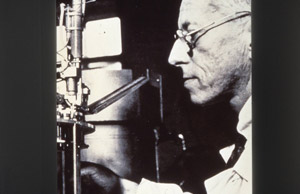 What a shame that the Institute for Macromolecular Research, where Dr Wichterle was employed, didn’t fully recognise the significance of his work (2), which led him to develop a spin-casting technique for hydrophilic lenses using a toy MECCANO® set (Figure 2). 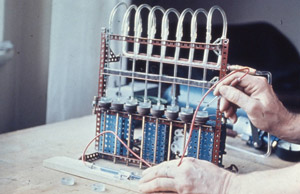 You could argue that the emergence of soft contact lenses was the most significant eyecare development in the last century, spawning an industry that currently includes approximately 140 million lens wearers worldwide. While soft lenses were successful because of their superior comfort compared to rigid lenses, it didn’t take long to realise that early thick hydrogel lenses had physiological limitations (3, 4). The bio-incompatibility of these materials led to ocular surface complications (5), which were primarily due to surface deposition.

In the early 1980s scientists began experimenting with thinner lenses with higher water content, to increase oxygen transmission and permeability with the intention of improving the physiological response of the cornea. It was obvious (simply by calculation) that hydrogel lens oxygen transmission was limited due to the polymer chemistry of the material itself, which attracts and binds water.

In the early 1980s, work was done to characterise the oxygen demands of the cornea. A seminal paper by Holden and Mertz, published in 1984, proposed that a contact lens should transmit 24 barrers of oxygen for daily wear and 87 barrers for extended wear to eliminate corneal swelling (6). Of course, in those days such soft lenses were only a pipe dream, but the criteria did pave the way for industry to develop new materials that would eliminate physiological barriers.

It took another decade for the industry and collaborators to develop the first highly permeable soft contact lens. This development seemed almost magical because scientists had struggled for years with finding a way to incorporate silicone elastomer into the hydrogel polymeric mix.

The first report of the physiological benefits of silicone hydrogels was presented at the 1995 Association for Research and Vision in Ophthalmology (ARVO) meeting (7), but it wasn’t until 1998 that Focus® Night & Day® (CIBA VISION Corporation) and PureVision® (Bausch & Lomb, Inc.) were introduced. Since then, the market has grown by about 50%, from eighty million wearers (International Association of Contact Lens Educators [IACLE], 1999)— obviously not solely due to silicone hydrogels. 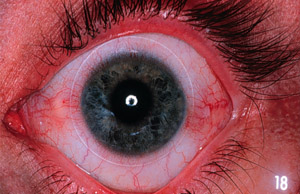 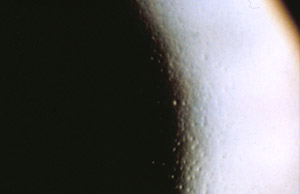 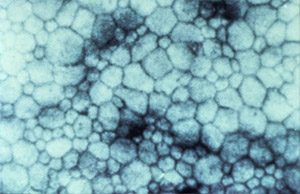 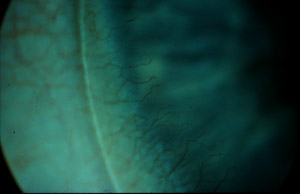 In 2001, the Centre for Contact Lens Research (CCLR) at the University of Waterloo, Canada, and the Vision Cooperative Research Centre (Vision CRC) at the University of New South Wales, Australia, developed The Silicone Hydrogels Website (siliconehydrogels.org). For ten year, the web site was primarily funded through an unrestricted grant, primarily from CIBA VISION Corporation, with contributions from Bausch & Lomb, Inc.. I would like to take the opportunity to thank Dr. Warren Modlin at CIBA VISION Corporation, who helped us conceptualise the web site, championed the cause, and secured funding, and Dr. Fred Edmunds at Bausch and Lomb, Inc., who later jumped in and saw the value of this successful educational tool. Both of these gentlemen are no longer with the respective companies.

If you have never visited this web site, it is still accessible but it has been superseded by Contact Lens Update. The Centre for Contact Lens Research (Canada), the Brien Holden Vision Institute (Australia) and CIBA VISION Corporation decided to discontinue The Silicone Hydrogels Website on its tenth anniversary in favour of expanding a website with an expanded scope. See the feature article for more about the archiving of www.siliconehydrogels.org and the development of this new educational website.

Finally, I would like to acknowledge Dr. Dwight Akerman, who has carried the torch for these ventures at CIBA VISION. Contact Lens Update will continue to receive funding via the same unrestricted grant.